Here’s How To Get An Absolutely SHREDDED Physique

Building a muscular physique isn’t incredibly difficult, but it requires you to take the time to learn exactly how each muscle is structured.

Now, it’s not as simple as moving a bunch of weight, but that’s definitely part of the equation.

To get the best results possible, you must understand your muscles’ biomechanics and fiber type composition. This allows you to know how many reps you should do, at what frequency, and what amount of rest is appropriate for optimal growth.

Unfortunately, many lifters don’t apply this knowledge to specific muscle groups and rely on doing sets of (on average) 8-12 reps during their entire workout. This is a mistake because every muscle is different than the next, and its composition requires you to make changes depending on what you’re working out. 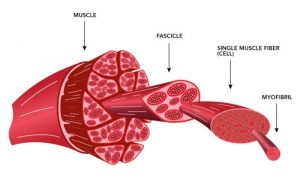 Fiber Types
There are at least three different types of muscle fiber. In order of increasing contraction speed, increasing force production and decreasing resistance to fatigue, you have type I, type IIa, and type IIb fibers.

Below is a chart showing you the difference in these fiber types:

The fiber type composition of each muscle varies per individual, but as with most physiological characteristics, people don’t differ that much. In the general population, differences in the percentage of slow twitch muscle fibers are normally below 5% and almost always below 10%. So, you probably aren’t that special in this regard, even though your momma said you were. As for muscle fibers changing from one type to another, getting old seems to be a factor (the percentage of fast twitch muscle fibers in your body starts to decrease after age 30), although some studies have shown high-intensity resistance training helps to prevent this. 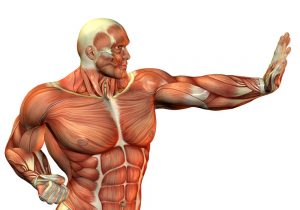 Whatever the story, since weightlifters, powerlifters, bodybuilders, and sedentary populations differ less than 5% regarding the percentage of slow twitch fibers in their muscles, it’s unlikely that you need to take fiber conversion into account with your training. Also, the theory that high intensity (>90% of 1RM) is optimal for hypertrophy because it makes you more fast twitch and those fibers have the highest growth potential is false. Yes, getting stronger helps you get bigger as it enables you to put more stress on your muscles, however, it’s also important not to neglect your slow twitch fibers. In bodybuilders, equal hypertrophy of both fiber types has been found, in contrast to powerlifters and Olympic weightlifters, which show preferential hypertrophy of the type II fibers.

How Do I Know What Muscle Is What Fiber-Type?

Of course, this is all just theoretical if you don’t know the fiber type composition of your muscles. To solve this problem, some smart trainers – who for whatever reason, always seem to be French Canadian – came up with a test to find out how fast twitch a muscle is. This test is commonly known as the 80% test. In short, you find your 1RM for an exercise that isolates a specific muscle and then test how many reps you can do with 80% of that. If you can do less than 8, the muscle is fast twitch dominant. If you can do more than 8, it’s slow twitch dominant.

The upside of this test is that it’s individualized. The downside is that it’s impractical. I don’t know of anyone that uses it systematically because you need to find an exercise for each muscle that really isolates it, meaning it’s probably hard to do a 1RM with that particular exercise (ever do a 1RM fly?). You also can’t overcome neural factors. Bad technique or an inefficient nervous system will cause you to underestimate your 1RM and make you look more slow-twitch than you really are. You can use exercises like front squats and dumbbell bench presses to get a general idea of your fiber make-up, but it’s far from perfect. 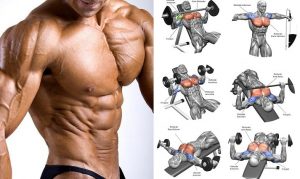 For pressing movements, the more you flare your elbows out to the sides, the better. This internally rotates your shoulders and makes the exercise involve more transverse shoulder flexion and less (non-transverse) shoulder flexion, which is the movement that occurs during front raises and mainly targets your front delts. In agreement with Vince Gironda and TC, neck/guillotine presses are arguably the greatest pec exercise in existence. Benching like this is known to cause shoulder pain for some – not to mention decapitate the odd hapless pudknocker who erroneously assumed “Guillotine” was yet another French Canadian strength coach – so you may want to use dumbbells or not take the risk at all.

An underrated exercise that doesn’t mess up your shoulders while still really hitting the pecs is pronated grip fly’s. Most people do fly’s exclusively with a neutral grip, but the pectoralis major is stronger when the shoulders are internally rotated, so a pronated grip is superior for chest stimulation. 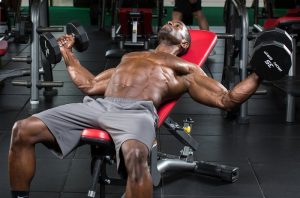 You can do this with dumbbells, but dumbbell fly’s have a resistance curve that doesn’t match the human strength curve (no tension at the top) and going too deep can compromise the shoulders. As such, I prefer cables. If your gym doesn’t have attachments that allow for a pronated grip, like straight handles or short ropes, you can just grip the hooks (attachments are for pussies, right?) or pull straps through the hooks and grip the straps.
As for the optimal amount of reps to use for chest exercises, use relatively low to medium reps. 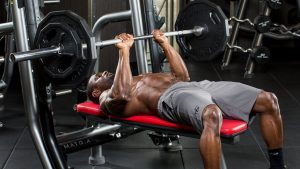 If you understood the section about the chest, you know why benching like most powerlifter isn’t optimal for chest development. Powerlifters often don’t have the biggest pecs, but their triceps are usually monstrous (Dave Tate, anyone?).

This isn’t only due to the biomechanics (arched back, elbows tucked, J-curve) of the powerlifting bench press that emphasizes the triceps over the chest, but also the triceps’s fiber type composition. 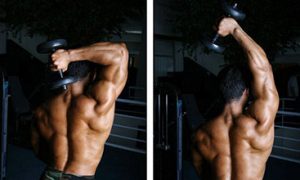 Accordingly, it’s best to use relatively low reps the majority of the time. There’s one more thing you should know about the triceps – it consists of three heads (long, lateral and medial) and the long head is biarticulate, meaning it crosses the elbow and the shoulder joint and helps to extend and adduct the shoulder (move your arm down and towards your body). That means it enters ‘active insufficiency’ when it has to function as an elbow extensor while the shoulder is adducted or extended. 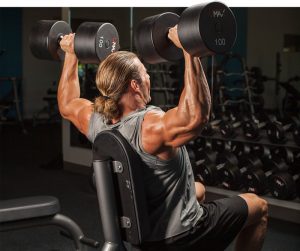 As you probably know, there are three deltoids – the anterior, lateral, and posterior head of the shoulder.

By the way, there is no such thing as a ‘medial head.’ In anatomy, medial refers to ‘near the middle of the body,’ whereas the correct term, lateral, refers to ‘the outside of the body.

The terms are commonly confused and understandably so, but they’re in fact opposites, not synonyms. Terminology isn’t the only thing that’s misunderstood about shoulder training. Many people use completely unbalanced shoulder programs. Gundill (2002) noted that bodybuilders have front delts that are on average five times bigger than sedentary people. But their lateral delts are just three times bigger and their rear delts a mere 10 to 15 percent bigger.

This isn’t surprising, given that many people do horizontal and vertical pressing on top of shoulder work – and their shoulder work isn’t balanced to begin with.

How To Train JUST The Middle Shoulder 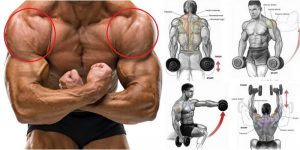 Decrease the amount of shoulder flexion (raising your arm as in a front raise). You may have heard that it’s safer to do side raises in the ‘scapular plane’ which is about 30° to the front, and this is correct, but that means it becomes a front raise. The same goes for not fully extending the elbow. Yes, it’s easier on the elbow joint, but you should still aim for 99% extension. This should be sufficient to keep the stress on the muscles instead of the elbow. You want the weight to be in a line that extends straight from your lateral deltoid. This means it’s better to do the exercise on an incline bench.

Try an angle between 15 and 60° incline. The lower the angle, the more you also involve the posterior deltoid.

Doing side raises on an incline brings me to another factor to increase lateral delt activity, range of motion. The first 30° or so degrees of abduction are produced primarily by the supraspinatus, after which the lateral deltoid becomes the prime mover. Now, that’s not a bad thing, because the supraspinatus needs training as well, but it does mean you need to control the motion at the top. If you’re one of those yahoos that yank the weight to the side and then duck under it, you’re just straining your supraspinatus instead of training your lateral delts.

If you do the exercise on an incline bench (face into the bench), you can’t duck under it, and can focus on muscle activity instead.

There’s one more very important factor that determines shoulder muscle activity – shoulder rotation (just like with the pecs). The more you internally rotate your shoulder during shoulder flexion and abduction, the more you involve both the lateral and the posterior head, and the less you involve the anterior head. However, during horizontal shoulder abduction, as in a reverse fly, externally rotating your arm actually increases lateral deltoid activation at the expense of the posterior deltoid. So for lateral and posterior deltoid training, I advocate extending your elbow very close to fully, not using the scapular plane, and internally rotating your shoulder.

These technique adjustments increase middle delt stimulation, but also decrease subacromial space width and increase impingement risk, so take care if you have shoulder issues. Also, you can counter these problems somewhat by retracting your scapulae.

The thing is, shoulder impingement is mainly a concern if your shoulders aren’t structurally balanced to begin with and these exercises ameliorate that situation, so it’s a bit of a chicken-and-the-egg scenario. Additionally, I recommend doing shoulder isolation work on an incline, which is generally easier on the shoulder. As for the posterior delts, besides internally rotating the shoulders during reverse flys or low incline side raises, you can train them with any type of pulling motion, such as rows or face-pulls, that hyperextend the shoulder (bring the elbow behind the body). The lats and the pecs can’t extend the shoulder beyond anatomical position, so the posterior deltoids then become the prime movers. For front delts, the front raise in the scapular plane with the shoulder externally rotated is a decent, risk-free front delt exercise.

Unless you’re not doing any overhead pressing work, I don’t think you need any front delt isolation work though, especially not until your shoulders are structurally balanced.

Speaking of structural balance, to train the external rotators, I recommend face-pulls with an underhand grip. Be sure to pull the rope all the way against your face. If you want to isolate the infraspinatus and teres minor, do side-lying external rotations. They produce the greatest EMG activity of most external rotation exercises and allow for full ROM. Remember though, reverse flys also train all the external rotators, so unless you have trouble activating the infraspinatus and the teres minor, it’s generally sufficient to just do those and face-pulls. As for reps, all scapula-humeral muscles are actively involved in maintaining posture and stabilizing the shoulder during practically every upper body movement. As such, they can be expected to have a high work capacity and are correspondingly around 60% slow-twitch dominant.

This goes for the entire shoulder girdle, with one curious exception – the infraspinatus provides some oomph for the external rotators and is fast twitch dominant by a small margin.

Hopefully this information helps you when it comes to optimizing your workout. Don’t just do the standard 10 reps, and move on. Know what every muscle in your body needs to grow!